“Perhaps home is not a place, but simply an irrevocable condition.”
~ James Baldwin (from Giovanni’s Room)
* 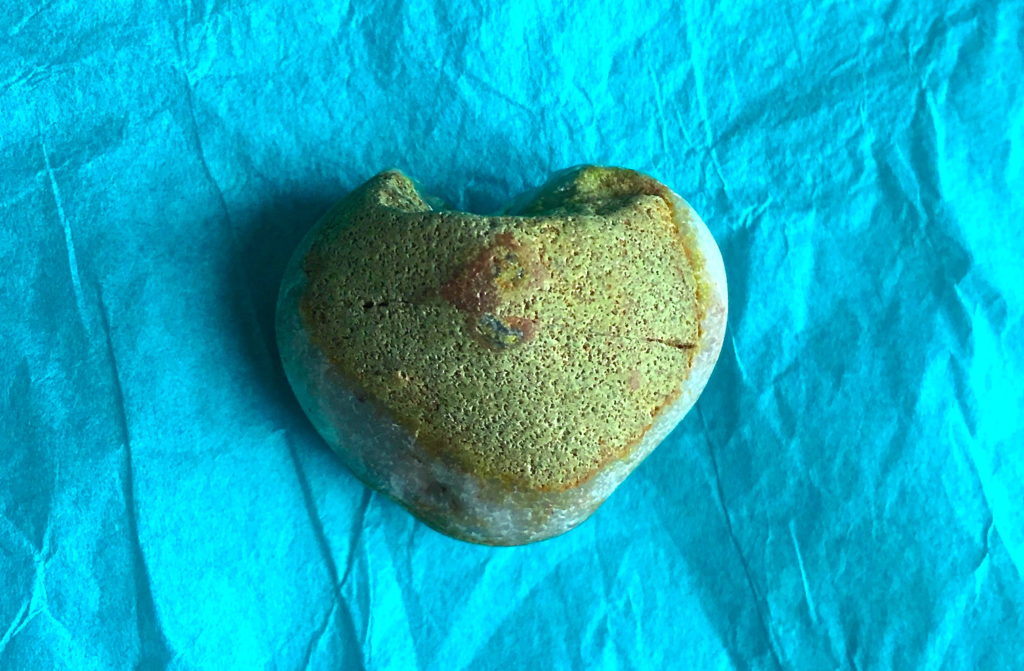 Heart rock, with a thick quartz ring around the entire perimeter.
The ring makes it a wishing rock.
It fits in the center of my palm.
*

Yesterday this time I was sieving thru 3 tiers of security and customs in Toronto airport. Even with designated lines and expedited international baggage transfer, it dawned on me how much tougher coming home to the states is to arriving in Canada. And the lines could’ve been much, much longer on a later flight, with so many more planes in the air. I whispered a Thank You for that 5am first flight out of Saint John, New Brunswick.

I’m calling today Part Two Canada. At the end of Part One, I’d split with my guide in a bevy of differences that left me with a week alone on a tight budget in Canada. I was headed toward Prince Edward Island (PEI). This morning, walking before dawn within the ring of townhomes where I live, I saw exactly how angels watched over me from the moment I entered that gas-stop cafe, had tea and pancakes while I regrouped. Oh, gosh, that sounds so Pollyanna-ish, but honestly, they did. My caveat, as a human I knew each one as it happened, but not until this morning did I see the pattern.

A bit about me in travel. I’m an explorer. I rarely read about places before I go except to get a lay of the land and cultural rules of the place. I love ambling, talking to locals. Rarely feel I missed something because each arrival to a gem holds the surprise of discovery that could’ve been dampened by expectations. But I felt bruised and vulnerable last week, my only knowns the east-west parameters I’d travel. And that PEI was famous for mussels (I learned later they’re famous for potatoes, too). My then unknowns: how hard it is to find a room at the last minute, especially in the earliest and best high season ever. Canadians staying home for vacation because of their dollar. US folks traveling ‘cause our dollar gets 22% more in Canada.

I could talk about a lot of things. Like when you go to PEI, know the best food on east PEI is from tiny, off the beaten path take-outs. Kinda gotta know it, or someone who knows it kind of places. And locals agree. Places like Lin’s in Greenwich beside St. Peters. Far off the road. The drive up thru planted crops. Small sign you could miss. Road no one travels unless they’re going to their farm, state park, or Lin’s. Dinner of scallop burgers (think grilled), handout fries and perfect homemade slaw + ice cream made on the island – Big YUM – at a picnic table, looking out at St. Peters Bay. So quiet the gal speaking gently over the speaker startled me. 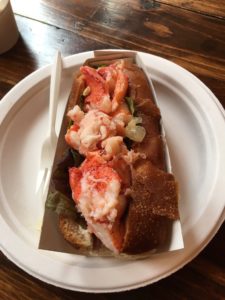 Or Pirate’s Cove take-out at North Lake, a flat point that boasts a windfarm of 10 super mills & the title Blue Fin Tuna Capital. The buildings, a short row of motel rooms, painted light yellow. Grayed fishing sheds with piles of lobster traps all about. The entire place seeming deserted. How I drove out, but turned around when the little voice said to. Where when I asked ‘How much mayo in your roll,’ a conversation struck. The gal appreciating me, as she’d always searched for a ‘real’ lobster roll, too. One that wasn’t the standard of lobster bits smothered in mayo. Every time she came home from the big city she moved to, she said. Until she finally moved back, decided to make them right. Took over running this one of three pirate-themed shops. I’m not much into pirates, tho, she said. ‘It’s on your sign, that counts,’ I replied. And we laughed before I sat down to a beautiful roll, brimming with large pieces of unadulterated lobster on a bed of organic lettuce picked from a garden out back, a slip of mayo underneath.

But this story is bigger for me. It’s about Home. A theme that’s showed up a few times on this blog over the past 18 mos. And it’s up especially now because we’re leaving Florida at the end of December. Don’t have a home staked, yet. And tho I don’t say anymore that I don’t how I’ll do it, I think about how it’ll unfold nearly every day. But not ’til this morning did I understand I’ve already been shown it’ll be okay, despite appearances.

I visited three inns in Saint Andrews late Mon. afternoon when I arrived. One room only available in each. And I missed my first & second choices by minutes. Because I stepped away to see what better I might find, returned to the room booked. Once to watch a gal pay for it. Even the off-water places – No Vacancy. I gave in to accept a basement room that felt bad, smelled musty. But Jackie at the counter said, ‘You shouldn’t be on the ground floor.’ And she moved things around. ‘These people won’t mind, they’re late arrivals, with friends.’ + I made her day because I was so nice, she said. Angel #1.

Tuesday, PEI was 6+ hours away, not 5, as expected. I arrived on island 15 minutes before the Information Center closed. First time ever I used such a place. 3 rooms available on the east side under $150/nt. 1-1/2 hrs. later I  arrived to my bed. The next morning I sat with an author at breakfast. Go figure the luck to talk writing, right? He wants to quit his day job. I shared guidance for marketing & finding an agent. Was surprised again at how little authors know about the biz of being an author. Was reminded the hours of search and study it takes. Reaffirmed once more the value I can offer. + I learned the inn had a cancellation, so I booked a second night. Angel #2

I rested all day Wednesday, relieved I wouldn’t be moving on. Walked 4-1/2 miles thru a park, crossed a floating boardwalk on a gorgeous marshy pond to stand at the top of tall dunes at a red sand beach. And hunted for a bed Thursday night. I couldn’t book the one I wanted online. That’s because we’re full, the gal on the phone said. Then. . .oh, wait, we have one more room. Angel #3.

Thursday morning, realizing my old bones needed more rest than I thought, I wanted to make it 2 nights in my new location. Nope, full. Then. . .oh, wait, one more room. It’s more expensive, you have to change rooms. Angel #4. As a bonus, my new room vacated early morning Friday. No packing the bag tightly to wait in the office. By 9am I was in my new room overlooking the river. Angel #5.

Angel #6 delivered me to a big room in a haunted inn in St. Martin’s on the Bay of Fundy Saturday night. I’d searched 10 places, was at the door with my packed suitcase when the little voice said, ‘go back, look one more time.’ The inn popped up first. One I hadn’t seen before. I arrived before dark. In the large hallway at the top of the stairs, I felt chills. An unmistakable tingling of energy that wasn’t God Bumps. What is that, I asked. ‘Don’t be afraid,’ she said. But she wouldn’t talk about it, except to say she’s seen a man in a top hat sitting in the chair in the large alcove at the end of the hallway. Under the wedding arch, looking out to sea thru the tall arched windows. And I wasn’t afraid, because the energy felt loving. And she’d said on the phone when I booked I’d feel that way.

Every day it was full-at-the-inn, and a room appeared. One that delivered what I wanted. And I was fed, soul & body. Which to me is a sign to carry. Let go of my fret about my bigger search for Home. Can I do it? I don’t know. But I got my wishing rock in case I slip.

Low tide on the rock beach in Saint Andrews. Bay of Fundy.
Where I found my wishing rock the last day of my trip.

I’m writing a book, The Writer’s Block Myth.
The creative life for people living in the real world.