Open your eyes and see what you can with them
before they close forever.
~ Anthony Doerr (from All the Light We Cannot See)
*

This first issue Susan B. Anthony stamp was given me by a college professor in 1990.
I wrapped it with lots of padding, paper, and tape. Enclosed archives from my time at NC State University. Then unwrapped it, took a picture.
Because it went in the mail today.
This is the story why.
*

In 1989 I returned to school for the fifth time to complete my BA. Until now I felt those previous four attempts were failures in my character. I should’ve worked harder to rise above emotions and circumstances. Been more mature, got my priorities straight. Looking back, I understand the bigger plan of the Universe had nothing to do with failure. Because when I walked away Summa Cum Laude in 1991, final proof to myself I was ‘smart enough,’ I left a legacy. And that never could’ve happened earlier. Because I never would’ve had the activist’s passion or vision that drove me to rise at 4:30am after crawling in bed at 11pm, do the work.

I underline – I was an unintentional activist. My stated mission of a Women’s Center on campus by the time I graduated 2 years later came from new awarenesses. And it was something even those who worked toward it called impossible. North Carolina State University was large (22,000 students). Conservative. Centered on the sciences and agriculture. Women students on campus was only a 20 year, or so, phenomena. It was a time state budget cuts for education were first deeply felt. Full professors held a Bake Sale in symbolic protest. Campus real estate grew more precious. I loved college life, felt so happy and lucky to be there, but I also felt the pain of isolation.

Here’s the letter I sent with the stamp. The last paragraph the reason why I do the work I do now, and still hold hope in a world awash in bad stuff:

You and I spoke a number of weeks ago regarding my donation of two framed items that were inspirational to me when I was at NC State, dedicated to securing a women’s center on campus. Enclosed is one of the framed items I mentioned – a Susan B. Anthony first issue stamp released on the 50th anniversary of the 19th amendment giving women the right to vote in 1920. I hope you have a place on your walls for it. With the upcoming elections, it’s a good reminder privileges we take for granted were not always here. And often came about only after years of dedication and focus by others before us. I think it’s especially hard for young people to imagine. Call it too many hours on Facebook or whatever, but I think we’re at a crossroads as a society, which makes this an incredibly important reminder.

I’m also enclosing copies of archives from the ‘early days,’ before the Women’s Center. Honestly, I have not looked at these materials in over 20 years. Am not even sure why they remain in my files, except the fact seeing a Women’s Center on campus was a singular guiding light once I decided that’s what had to happen. And that intent infiltrated everything I did as a student. I even still have the research materials for my proposal! Go figure, right.

Before writing this letter, I perused your website again. Looked up other resources on campus. I am so heartened to see all the services the Women’s Center provides. And to see the long list of people on NC State’s Council on the Status of Women advising the provost. Understanding the huge evolution since my time there, I want to share a bit about myself, too. Because it may be inspiration for others who feel an urge to do something greater than themselves in response to a spark inside (should you choose to share).

In fall 1989 I entered school for the fifth time with the intent to earn a BA. I had a son in college. Just left my first ‘real’ job as a corporate advertising account manager. Before marrying my second husband in 1986, I’d been a single parent for nine years after walking away from a years-long physically and psychologically abusive marriage. I had never heard the word patriarchy, but I’d experienced gender discrimination when I couldn’t get a loan for a washing machine without a husband’s signature. And once worked in a fine dining restaurant that didn’t allow women to wait tables at night. A month into classes, I heard young women talk about the risk of date-rape as something they accepted. And I was shocked.

My greatest challenges my first semester, though, were as a non-traditionally aged woman student. My intent was to earn a Certificate in Training and Development as part of my degree, so I would eventually enroll in a number of graduate courses with my undergraduate free electives. But that was down the road, and they all met after 5pm. I sought out Evelyn Reiman, then Director of Student Development, who sent me to Jan Rogers, the Coordinator of Women Student Concerns (Dept. of Student Development). Jan shared a tiny office with a student assistant on an upper floor of the student center. At Jan’s encouragement, I secured a classroom for a support group meeting, put up flyers across campus inviting others to come. That endeavor did not last long, but something else happened. I grew determined we needed a women’s center on campus, with resources to address the challenges women students faced so no one else would feel unmoored and isolated the way I did. I committed to seeing it established before I gradated in 1991.

I banded with a small core of like-minded faculty and students, became a tireless activist. I recruited, educated, and organized students, faculty and university administration on women’s issues every chance I could. Was one of two student representatives on NC State Council on Status of Women. I announced my intention for the women’s center at the Student Leader’s Retreat after becoming president of the newly formed Women’s Resource Coalition. Spoke at Panhellenic meetings. Founded the first campus-wide newsletter distributed to 16,000 women students and faculty with another student. Centered every class paper on gender when allowed. Researched and developed a proposal for a woman’s center as an independent study that ultimately became the core of the final proposal.

On November 1, 1990 associate professor Dr. Sarah A. Rajala and I were scheduled to discuss development of a Women’s Resource Center with Interim Provost Dr. Franklin D. Hart. Dr. Rajala was ill that morning, so I met with Dr. Hart alone for nearly an hour. I knew the School of Engineering set a fine example in the way gender equity in the classroom and program was addressed and championed. So, I spoke to him from that place, what we shared in our understanding. At the opening ceremony of the Women’s Center, Dr. Hart said his meeting with me was what convinced him to put his full support behind it. At that time I could only think of the miracle I stood in this space I was told was impossible. I told him we all did it.

Because that’s how change happens. Change comes when something opens inside a person that leads to actions never intended. Takes him/her past stuck. When a vision forms that is impossible to let go. It is not a quantum leap until after a series of shifts in mind and heart. I call these shifts triumphs. And say, celebrate all triumphs.

Thank you for doing the good work.
Sincerely,
Heloise Jones 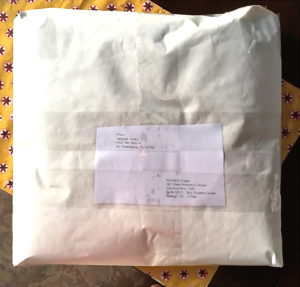 Tell me. . .what vision for a better world do you hold?
I’ll tell you a secret. . .tho the magnitude of the Women’s Center presence on campus didn’t hit me until I stood in it, I never once doubted there’d be one before I graduated.

*
I’m writing a book, The Writer’s Block Myth – A Guide to Lasting Creative Freedom.
The creative life for people living in the real world.