“This turning toward what you deeply love
saves you. Read the book of your life,
which has been given you.”
~ Rumi (from A Voice through a Door)
*

I went to a most extraordinary concert the other night. Jami Sieber on electric cello + Kim Rosen reciting, nay chanting, poetry like she was calling our spirit to dream deep and live out loud. As I walked into the space, a woman approached me with a box in her hands. Want a poem card, she said. I took the one on top. The lines paraphrased what had been up for me this past week. It felt like an affirmation. I wanted a blessing, or message. I traded it in. The poem on the second card was from “The Still Time” by Galway Kinnell, and as it turned out, my first story of the night taking me home.

The music went to my bones, flowed with my blood. The poetry Kim spoke, repeating lines as a chorus, started with a mix of Mary Oliver’s ‘The Journey,’ Leonard Cohen’s ‘Hallelujah,’ and her own. She took us into the words of refugees fleeing horror. ‘No one leaves home unless Home says Go, you are not safe here.‘

It was her chant of Rumi’s Sometimes you hear a voice though the door calling you, as fish out of water hear the waves from “A Voice Through a Door” and

If the water were clear enough, if the water were still. . . you would see yourself, slipped out of your skin, nosing upstream, slapping, thrashing, tumbling over the rocks till you paint them with your blood from ‘King of the River’ by Stanley Kunitz

that cracked my heart open.

Once home, I ran to my small bookcase, reached for my two Stanley Kunitz books. “The Wild Braid: A Poet Reflects on a Century in the Garden,” written when he was 98, was missing.

I knew the shape of what I looked for. The cover, the thickness of the spine. I turned to the three boxes of books behind the door. I searched twice. Not there.

All the books neatly back in the boxes, I questioned myself. I’d missed something. The next morning I pulled every book from the boxes and stacked them on the floor.

I once had an entire wall of books. I shipped them move after move for decades. Six years ago, forced into a downsize, I decided I wouldn’t do that again.

Some left easily: I no longer did raku, would never build a kiln; I hadn’t read the spirituality books in ages. What remained were linked by attachments and meanings not on the pages in the books. And not ‘til I wrote my husband in NC ‘You have one of my books. It’s important to me,’ did I realize that truth.

I remember the first time I heard a poem from “The Wild Braid.” The vivid image of entwining snakes in a tree. I remember where I sat in the circle of women who came together each week to write to prompts, and read our raw work aloud. How later I gave the book as a gift to new friends in New Zealand when meeting for the first time. Knowing they were writers and gardeners. Not knowing how precious and costly books were in that country. This book has memories. It has stories beyond those on the pages.

I looked at the other books I’ve kept thru four downsizings.

Author and director John Sayles’ signed novel. Because I’ve followed him since 1984 when I saw ‘Brother from Another Planet’, not fully understanding what I watched but feeling I knew this director. And because when I finally saw him in person, he embodied such presence with each person when he spoke that I will never forget it. And a signed book by author Ron Rash, who wrote one of the most beautifully haunting passages I’ve ever read, and years later blurbed my own novel. There’s all of author Nancy Peacock’s works. Including both volumes of her last novel (self pub & trad pub) + her very first publication in St. Andrews Review that she gifted me when I was young & beautiful. A story that became her first novel. We’ve been friends for 35 yrs. and she is the first writer I ever met.

There’s numerous poetry books, most purchased at readings and workshops. Books on writing – process, craft, exercises. The pristine hardcover of Stephen King’s “On Writing” I got second-hand, feeling so lucky that day. Volumes on creativity, two dozen large art books and a number of small exhibition booklets. I still have a half dozen cookbooks, tho I no longer cook beyond function. There’s more memoir than I realized. And a miscellany of reference that follows no particular thread except energy and connecting with the Universe. Only a small number of novels remain. Some I may or may not read. A few because they’re hard to find. A few because they’re simply the best for language, story, and/or craft. And in the mix, three vintage books on beekeeping given me by my son that hold a flood of memories.

The process put me into my Life. I whittled the three boxes to two. Short stacks of a dozen novels on trial + beloved oversized art books now sit on the floor, a chair, and on top of the boxes.

What it all gets down to are the stories inside us that give meaning, and hold the energy of a life lived. Every book has a story in it for me, whether in experience or one I still hold in my mind. Things more than merely things. Holding more than the sum of their parts. 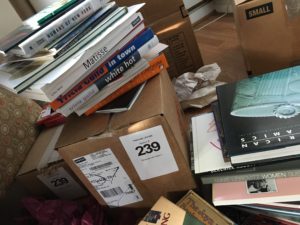 For me, the theme of the night was greeting my life. I knew it by the time I heard  Derek Walcott’s ‘Love after Love.”

The time will come
when, with elation
you will greet yourself arriving
at your own door. . .

You will love again the stranger who was your self .

And returning to what we were born to love? I didn’t know ’til the very, very end it is myself I return to. Or that the changed air between my palms born from living my life falls like glitter on common things.

So it surprises me now to hear
the steps of my life following me — so much of it gone
it returns, everything that drove me crazy
comes back, as if blessing the misery
of each step it took me into the world;
as though a prayer had ended
and the bit of changed air
between the palms goes free
to become the glitter
on some common thing that inexplicably shines.
~ from “The Still Time” by Galway Kinnell

Kim Rosen says poetry is our first language. What do you think?

Like what you read? Get updates in your inbox.