*
The Beginning is near. 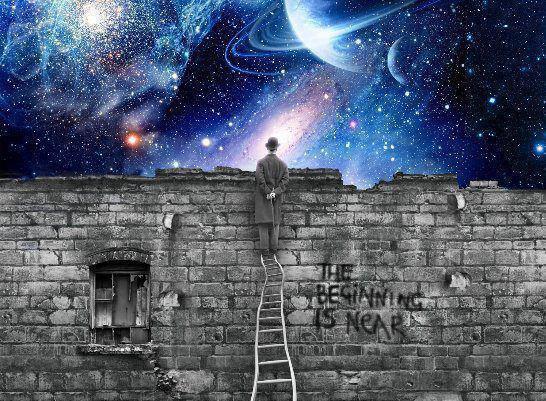 My ladder is off to the side, out of the frame.
*

I stood on our street corner. Felt happy and special that the overcast sky opened so I could see the Super Blood Moon eclipse to full shadow before the clouds closed back in. A neighbor stood with me. She commented she felt small after seeing it. I’m the opposite. Whenever I see phenomena like this, or see a large ‘star’ at the horizon I know is really Jupiter, a pink small twinkling ‘star’ that’s Mars, a helicopter bright star that’s Venus, I feel huge. Connected to something grand. And I see big, round, colorful planets. Feel on the edge of some great story, part of it my story, turning with the Solstice and season, all surety stripped except knowing I’m okay.

A hint of the turning arrived on a flash of inexplicable happiness the other day. Sparkly Happy swimming through for no particular reason I could discern. Lasting long enough to notice and sit with, and share on facebook because that’s what you do with the good stuff. I thought perhaps decisions made had sparked it. Climbing toward Santa Fe a week from that exact moment perhaps (since all time is simultaneous, right?). Maybe seeing a few intentions realized. A friend called it Joy. Said a Jesuit priest defined Joy as “the infallible presence of God.” I’ve never really understood Joy. For something touted everywhere, the word has always confused me. I could grasp inexplicable happiness is probably right on, though. In any case, the feeling comforted me. And the association with God seemed an affirmation, because I needed it that very moment. I’ve been climbing my ladder at the wall in that picture since announcing no small happy life for me. It’s a tall wall.

Today on the radio I heard details of slaughters in Sudan – children hanged, entire villages wiped out except the 15 yr. old girls taken as slave brides, women & children in the river up to their chins, hiding all night as soldiers shoot into the dark water. The ones who escape, devastated by malaria epidemics in refugee camps. Listening, I thought of all the people, millions, who live in hell on earth. How privileged I am, what I must do with that privilege. Later I walked by a newspaper headline, “Pope Leaves a Message of Love.” He’s my sign of what’s over the wall. The head of a huge staid religious institution I might have prejudice toward. But he’s using his influence with Love. Stepping up as a progressive for how to live in the modern world while holding the basic tenets of his faith. Saying flat outright the planet must thrive for humanity to thrive, we are connected. And he tempers his statements with conditions (ie. ‘unfettered’ capitalism) vs. absolutes, because by golly, things are complicated. I’ve listened to the media, their ongoing dialogue about his cloaked references to Catholic doctrine. How he’s gathered support from people like me, hinting perhaps we don’t get it he’s Catholic (I really do have a hard time seeing him as religious) I want to shout, of course he’s Catholic. It’s his container. So what?! This is HUGE. And in the secular world, Bernie Sanders saying out loud the same thing with different words.

In the mid-eighties I wanted to know how to hold the concept of God. The usual words never feeling as present as the connection to that inexplicable something I feel. A metaphysical video passed into my hands. God is in the spaces between the molecules, it said. A spark of recognition – the Universe. We use the word Love a lot. I’m not sure most know what it means. But I’m confident a focus on it as a choice, looking up with that focus to see another for just a twinkling the same way ripples, can have tsunami effect. Faith grows, as the Pope says. My faith in humanity, that Hell won’t win. My offerings to the world will be driven by Kindness and Love. I can do that. Let’s do it, okay?

A favorite:  Anything celestial.
A secret:  The super power I would choose – flying.

4 thoughts on “Look Over the Wall”