When you’re on the highway of intuition,
you’re going to be picking up angels who are hitch-hiking there.
~ Matthew Fox 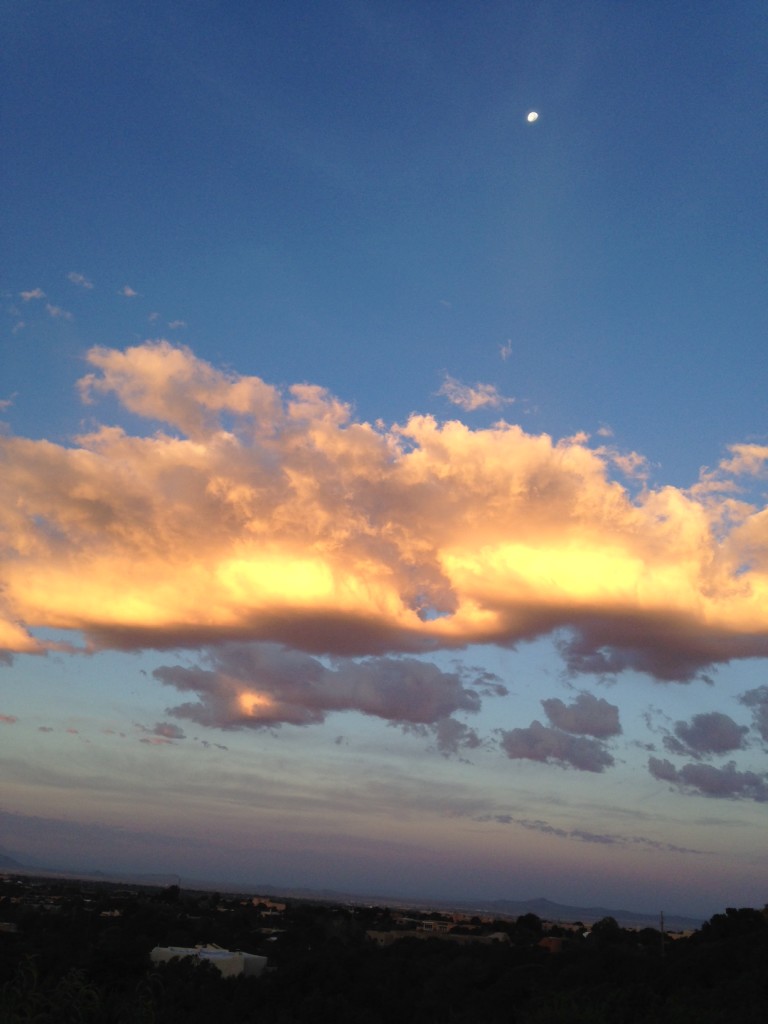 First dawn here. Sun at my back. Moon in a crystal blue sky.
Eye in the cloud.
*

When I was a tiny girl we lived in a 100-yr. old house in northern New Jersey. A tall two- story four square covered in blond, most likely asbestos shingles. It had a giant living room the full depth of the house. An open hall without railings on the second floor encircling a wide stairwell. I remember hearing how broken down the house was when my parents bought it. The warnings it could never be leveled on the side with the collapsed foundation. How my father used levers, jacked the house a little at a time, let the old boards settle. Find their true before he wracked them again. My mother often said you’d never guess how fine it was on the inside by the looks of the outside. I remember listening to songs on a record player at the back of the living room, loving my first Alice in Wonderland, the Disney version. Peeking over the sofa at kids in the street on the first ever trick-or-treat. And snakes – on the front path, traveling from the woods to under the side deck, once under the dining room table.

My intuition showed up there first, too. I walked the house at night, never fell off the edge into the stairwell despite no lights from outside or inside. They called me ‘cat eyes’ for seeing in the dark. My father said he’d look up, see me in the window watching him leave for work at dawn. Never a peep before that moment, as if I felt him, he said.

We moved when I was five. Intuition showed up as I got older, too. But I felt no more than a brief notice or unusual recognition of something-someone-someplace. Until recently, when I claimed it.

This is my twentieth trip back to Santa Fe since moving away. The only year I didn’t return I grabbed it as a tonic for my depression, made reservations for January. A time usually brutally frigid in the high desert. But that January the weather softened, warmed as if it was fall, after all. Only once has Santa Fe pushed me away. When I schemed to return for more than an extended visit. And I got the message. This is my place to remember who I am when life scrambles me up. A place where I open, feel expansive, leave different than when I arrived. Like the cave to the monk.

A few years ago I noticed themes in my sojourn, each determined by where I was in my life. A full social calendar the year I craved friendships after a difficult move and a new lifestyle. Nurturing and healthcare the year my heart and mind needed clearing. This year it’s about the work I’m creating. And I’m definitely on the intuition highway. Angels at my elbows.

I could tell a half dozen stories of seemingly magical ways people and things manifest from the moment I step out and about here. I think the best, tho, is one day when I walked with purpose toward a destination and glanced across the street, noticed a store. I stopped to look, not knowing why. Scrunched my eyes to see the clothes in the windows. If that was it. Twice I continued forward, and stopped. Turned and stared at the store. Before I crossed over. I don’t know how the gal who worked there and I dove so quickly into personal conversation. Why our connection was so perfect I felt sparkly. All before I learned she lived in San Miguel de Allende, a city I considered moving to. Had created a writers conference there, led it for years. That she had a similar vision for Santa Fe, was building a business of online courses, ones I could teach. We talked for twenty minutes, not another customer in the store. After we exchanged cards, they poured in.

I think synchronicity and coincidence are simply the Universe showing up to meet us. Always with something wanted or needed, often with answers to questions. And tho I stumble, I finally know not to dismiss random thoughts that make no sense. Because the fruit of the follow-thru usually does. I call it Presence. And it’s fun. Like magic.

Tell me. . .what synchronicities and random coincidence have you had?

A favorite: Yellow-gold cottonwoods against that special saturated blue of a Northern New Mexico sky.
A secret: I think it’s time I move back. No scheming. It’s just time for a magical, expansive life.

2 thoughts on “Angels on the Highway”