This. So friggin’ lovely. The space. The books.
The impetus to do such a thing. Preserve a theatre by transforming it into a bookstore.
The interest and support to keep it open.
Humanity. So friggin’ beautiful.

I’m losing track of time. My clue. Sunday I thought it midweek. Yesterday, Monday, I thought it Friday. Because whew, what a month. A lot of grief and sadness. I imagine you’re feeling it, too. So, I thought I’d share good stuff this time. Because when I asked, my husband said I mostly write about my awe and wonder with the world. Nice he gets that in the midst of my shares how I move thru the hard stuff in life. Nice he reminds me that, my goodness, a bunch of good stuff’s happening.

Last Wed. I signed a contract with a publisher for my forthcoming book, The Writer’s Block Myth. I’ll begin writing this week, and publish in January. Right when we all remember we have real lives awaiting after the holidays, and want to make them better than ever.

On the other spectrum. . .completion. Within weeks I’ll launch two accessible offerings that’ve been great fun (!!!) to create. An audio subscription of blogs I chose from archives, and my signature program – The Creative Life for People Living in the Real World. A package of audio recordings and printed guides speaking to writers, but really for all of us. Because it’s really about Life, and we’re all creative.

The thing is, this work to support us living and loving our best lives, is a call from the Universe I resisted for years. Even turned my back when I heard a roomful of angels scream in my head two years ago in Santa Fe.

And now, here I am. Running 6 deadlines simultaneously, personal and professional. Believing it all good. Including my son, grandson, and daughter-in-law, who I call the little family, arriving tonight from Taiwan. Four years ago I was on a countdown to their arrival. Hours, minutes, and when I knew the plane flew close, watching the second-hand sweep the clock face. But it was not the visit I anticipated. It was the kind that can happen with family sometimes. The kind that blindsides. I spun into nearly unbearable grief. And have never repeated the words said to me.

Because the lines we knew, the boundaries of love, the ways of being with the one you love most in all the world were broken. And it was impossible to mend thru emails. Time and love all to hold a heart together. And acceptance for what may (may, the key word) evolve.

They came, again, two years later. We found a peaceable kingdom between us. And messages have come after. We’re healing.

Tonight I pick up them up, two years since our last hug. We still don’t talk much on Skype. And the beach where they’re staying requires a drive too unpleasant to repeat daily, so I rented a condo close. But I’m counting hours, again. And making a breakfast care package. And my grandson, now half past 6 yrs. old, regularly writes me postcards. Lettered in pencil. The pretty girl who likes him. The teacher he likes a lot who’s also beautiful. How he cried at his kindergarten graduation, it was so beautiful. The markets of handmade goods he likes, and fun with best friends. How he loves flowers. Writing this, I notice how much he uses the words likes and beautiful. He notices how much I talk about birds. You probably do, too.

So much good stuff. And there’s more. Messages from the Universe! One morning at the bay for silence. Not bad humid. My bra soaked but not my shirt. I rounded a curve bayside, a large deep pink semi-circle appeared beside me in the water. Reflection of a cloud that accompanied me, kept me enfolded in visions of pink. On the way back, a bird called from above. Clear, three notes, in cycles that felt like the rotations from a lighthouse. I expected a small bird. But it was an osprey on the tall lamp post. I listened with it after each call. And indeed heard an echo. A response from a mate, I thought.

And a few days after that, two blocks thru the neighborhood, I hear the same call. Tip-top branch of a tree to my left. Like the other. Looking not my way, but out to sea. Again, 30 min. later. Bayside. All silent ’til I get close, Osprey in the tree right ahead. In three years of bayside walks, two yrs. nearly every day, this is the first I’ve heard osprey. Now 3 call, just as I approach, fall silent once I see. Say what you like. I thought them letting me know something good’s coming.

To make sure I got the message, these fell from a plastic bag in a box
I don’t usually riffle. Face down. 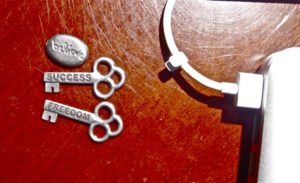 Look, the voice said. I turned the keys over first.

I saw a man softly hop-jogging beside a short tree stump of a woman. Her face focused on pavement before her. 30‘s, clearly fit, he gently encouraged her each step. ‘Come on, mama, doing good.’ I think, good son. When they come back by, I tell him so. He grins. She stops, looks up, smiles broadly. ‘He workin’ me hard.’ And she laughs, deep from her chest, her belly shaking. ‘Keep moving, mama,’ he says. I hear the love in his voice. The next morning, my wonderful Sound Man tells me about his father’s major heart surgery. Every detail of action and emotion inside him thru the ordeal. His eyes misting. Good son, I think.

Now, tell me. . .what good stuff can you share?

A secret: I’m learning to share secrets. The warmth I get back helps me be brave.
A favorite:  How all of us love flowers.

One thought on “Good Stuff Coming”