. . .throw roses into the abyss and say: ‘here is my thanks to the monster
who didn’t succeed in swallowing me alive.
~ Friedrich Nietzsche
*

I helped a writer get unstuck. She sends me updates. . .how she wrote three pieces & submitted for the first time in two years. Uses the resource I gave her, found new places to send work. Is developing her writer’s voice & accepts it.
And she sent me this picture of acres of bluebonnets in Texas
that makes the man in the picture look like a bug. A million flowers.
A gift because she remembers I dream of touring flower fields.
*

I’ve been feeling soft, vulnerable. Tender. My grief like a lowgrade fever, the walking kind. Showed up in my blog. The tone low, statements soft. In my fb posts with few creative stanzas. My own words brief in my shares. I knew I spiraled. Today I checked how long. Pulse. One month ago today 49 people gunned down as they danced. And today the city of Orlando ceremoniously moves 49 white crosses gracing the edge of a downtown lake that artist Gary Zanis from Illinois made and planted. They’ll reside at Orange County Regional History Center. History. But anyone can still buy an assault weapon. Pulse Pulse Pulse of blood. And yet, yesterday I felt a shift inside me. A spiraling back up.

As events dropped me to my knees last week, I observed anger spike, more than once. A surprise as it’s not where I usually go or stay very long. But as I drove to my audio session Friday, heard once more ‘guns are in our constitution,’ I pounded the steering wheel, hard. Screamed, ‘You idiot. For regulated militia. Read the damn document.’ And I realized anger held residence. Was not a flash like it usually is. But I needed to read for recording, had to be calm. By the time I arrived, it seemed I was fine. We chatted for an hour like we usually do. Then, my voice betrayed me. Pitchy sharpness clearly present as we listened. I thought to leave, try another day. And for the first time my wonderful Sound Man showed me how he adjusted the sound of my voice with more chest, starts of words softened.

My wonderful sound guy who unplugs in the Appalachian woods every now & then, tromps thru any waterway – tiny stream to swamp to ocean – and has dogs with dog best friends. Who was grateful for the turmeric capsules I gave him. Visited the place I suggested, got what he needed that med docs couldn’t give him. The one who says ‘don’t worry’ when we finish way later than I’m booked for. Who told me this story:

When we were kids (high school), there was a homeless guy named Rat Face we’d sometimes hang out with. He had it tattooed on his arm, answered to it. He was all torn up, all over his body. His legs looked like hamburger. Horrible (shudder). He’d call us, ‘Hey, Dudes. Let’s hang out’ and we’d spend the afternoon laughing and joking. He was always saying ‘when I get my money, I’m gonna buy a house’ and talk about what he’d do. Thing is, he got his money! And he bought a house. Where he built a huge outdoor kitchen in the backyard, fed the homeless. And took homeless in to live with him. He was still messed up, drank beer instead of mouthwash, but he helped others. We’d ride all over Clearwarer gathering expired food from markets and bakeries, take it to him. Later I was part of a core of guys, 15 or so of us, who cooked and fed the hungry for Food, Not Bombs. I got an old mail carrier’s bike with a big metal box to carry the food I picked up. And later, joined an REI sponsored program to teach people how to live in trees, protest logging on public lands. Got arrested along with a thousand other people protesting for civil rights.

I confessed my worry I wasn’t doing enough. Inspiring, empowering, motivating with my words. Helping and nurturing creatives thru snarlies and stuck, to live and love their best creative lives. That I’d once done great things as an activist. Felt guilty for not feeling ‘called.’ I questioned myself, because I care, care, care so deeply. And he told me, unequivocally, this getting arrested and resistance is not work for those who are not called. And somehow I knew he was right. I have my place in the web.

But the next day, awake at my usual 4:30, considering if I’d walk under dark skies lit by porch & street lights. Get on with all to be done. I simply couldn’t bear the oppressive heat & humidity. The computer screen. The sound of the washing machine. The guilt if I read a book, did nothing when so much needs my doing. I stayed in bed. Woke hours later. Still didn’t rise. The clock spun past 8 (so late!), then 9. I tried to take to heart the admonishment by the woman in my dream. Her strong words to shift my head away from my negative thoughts. And yet, I laid there. At 10, I rose. Heavy with grief for the world and worry about my personal circumstances. Barely holding it together.

Later that day a friend shared her self-doubts after a long depression and withdrawal from life. I told her we must have time of peace and rest between changes. So we can hear our own Soul Voice in the midst. Especially us creative folks. Shared how I saw a clip from a movie where a gal talks about an astronaut hearing a maddening knock-knock-knock that he can’t find the source of, so can’t stop. Knows he’ll go crazy listening to it, locked in the tiny cubicle for weeks/months as he is. So he decides to love the knock. And it stops, becomes music. I don’t know about that, I said. But I think it a beautiful aspiration. To find something to love inside the thing driving us crazy. Something for me to try in the midst of life whopping me sideways these past few years, I said. She called it a reflection. I call it Truth.

Because I know the truth of what Buddhist philosopher of ecology Joanna Macy says, The other face of our pain for the world is our Love for the world.

And I see clearly my gifts this past week. How I’m seen, remembered. Know my ultimate dream, my place in the web. Was affirmed I’m on the right path by a full-hearted Yes! as I hung up the phone with a publisher for my forthcoming book, The Writer’s Block Myth. Even the both/and of Life in moments of giggles. The realization everything – chat with my wonderful Sound Man, my response to a friend, gifts, resounding Yes – all angel messengers. The Universe meeting me.

I’m throwing roses to the monster in the abyss.
* 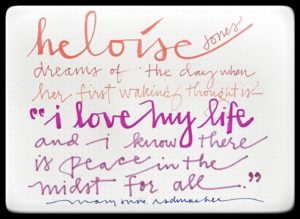 Tell me. . .what resides inside you? what gifts are you given?

Another small journey.
Getting to Wise.
A Writer’s Life.
*

A favorite: I edited last week’s blog to say what I really meant. Directly.
A secret: Despite dire predictions for our world, warnings of blindness, I still believe we’ll be okay.