The man at the door was tall, thin. His face was nice. Angular with smooth skin. And open, ernest expression. He looked to be in his 30s. ‘Paint your address on the curb,’ he said. I noticed the small portfolio with stencils, the caddy of spray paint. I told him I was renting. ‘I do it for $10, but I’ll do it for free,’ he said.

Most of the time someone hears I’m a writer, they say they want to write a book or they know someone who’s writing a book, or like one neighbor who sauntered over as I stood in the street watching numbers go down, says anyone can write a book, it’s easy. The young man fell into the first category. He had a book he wanted to write.

It was late, toward dusk, so I didn’t ask right off what he wanted to write. When I did, he launched in with a long story that didn’t sound like a book, though the person telling it did. Because while I learned why he was painting numbers on curbs for $10 a pop, that his smooth face belied the scars covering his body, and that he’s experienced a long line of sad ironies in his life, his character came out in the telling. Including his deep desire for connection and to be heard, revealed as he packed up for the curb across the street. ‘Come over,’ he said, ‘we can keep talking.’

In my book “The Writers Block Myth” I talk about the Evidence Journal. A piece of paper, notebook, or small book you can leave on the counter, the corner of your desk, or put in your bag. I emphasize it must be something tangible, because memory is a trickster. As humans, we dwell in expectations and judgements. We focus on what’s not there vs. what is there. We discount triumphs, possibilities, and any evidence things are different than the stories we hold in our minds of what’s true. And as writers, we’re pulled out of our process where creativity dances. Our creative life can feel squeezed by life in the real world. When what we want is to feel we’re writers no matter what’s going on in our lives.

I’ve had a desire to get back to writing fiction and poetry. I’ve mentioned it before. I’ve written several poems. Yea. The stories in the ethers have been more elusive. The good part is I’m an intuitive writer. I hear characters and stories. I know to be open and release judgement over what shows up. Still, I feel frustrated at times.

What happened in the street that evening while the guy painted my curb went into my evidence journal, because I saw I’m on the edge of receiving those fictional stories. Because I thought about a novel when the neighbor said anyone can write a book, it’s easy. I was present as the young man told me his story, and later, I thought of prompts from what he shared: He worked for the railroad. The girl’s father. . .  The evidence is clear.

We write everyday in ways we don’t consider true writing: Facebook posts, emails, lists. We take walks, go about our homes or work, and don’t consider what we see as feeding our writing life. The truth is, every one of these activities holds a prompt we can view and hear without judgement or the long story attached to it. Every one can be used to move us forward, whether it’s fiction or nonfiction, poetry or that essay about how to change the world. Call it observing with awareness, something writers do. Call it being a writer.

The curb was rough, so it didn’t turn out exactly pretty. I paid him, anyway. The following morning, I realized the gifts I got in the process. 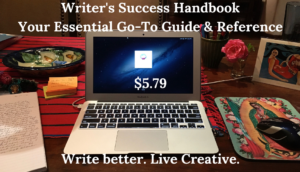