I have a small window in my shower, the opening positioned right at my upper body. It looks out to the backyard and western sky. I’ve taken to opening it as I bathe. The air outside feels delicious. A cool crispness on my skin within the hot shower. Reminds me of outdoor showers in Hawaii. Last week I saw from my window little birds splashing in the low-sitting platform of a birdbath. Birds taking a bath while I take mine, I thought. Do they know? Today I smelled sweetness & bread baking thru the window from the bakery-cafe a block down the street. I put my face to the screen, drank the aroma. Thought how I often smell bacon & omelets when I’m outside.

Walking across a parking lot the other day, I thought ‘fall has officially arrived.’ The sunrise comes in on a stroll now. Far later than it did two weeks ago. Night no longer waits for 9pm. I noticed the quality of the air appears thinner. The shadows have sharper edges. That I now expect each breeze to be a cool glide like a sheath thru the middle of the 85° heat. I even started thinking my stories of fall in NM – the far-flung studio tours, the smells of chiles roasting in big caged drums and pinon fires, the first snow, different rhythm of my life.

All tiny events. All triggering stories.

I edited two poems almost back to their original rough form this week. Both were free writes in workshops. Each got a ‘wow’ from the teacher. I put back what I’d clipped in my edits on the computer. Slipped back into rhythm that felt right. Told the gut story, trusting the reader, even if cleaned up a bit. I did it with red pen on paper. My body in the writing. Like stories are in our bodies.

I entered the poems in a contest. The journal required a short bio. I didn’t know what to put. The usual Authorly bio didn’t feel right. So I wrote poetry is medicine for me. Both poems are about loss. One as a daughter and woman looking back at her childhood. The other as a mother. I didn’t mention I received a Pushcart Prize nomination for a poem. In that moment as I hit send, recognitions didn’t seem part of the story. I didn’t think about other stories of loss, either. Including my own heritage.

I’m half-Armenian. Food is my only remembrance of my first nine years when I knew being Armenian. Those years when I heard Armenian spoken, the house filled with smells of special foods being prepared for weeks during holidays and funerals. When people shared the ways we were related by heart or blood. We moved when I was nine and all that was lost. What I learned firsthand, before I ever read it as a scholar, is that food and language hold a culture. Even more, how food’s prepared and the words spoken. Their meanings. They hold our stories. Even the blends of everything we are.

I saw an article about a most amazing theatrical production called Oh My Sweet Land. A play ‘about a woman of Syrian-German descent whose search for a lost lover takes her from a sheltered life in Paris to the refugee camps of Lebanon and Jordan and finally into Syria, to confront the smoldering remains of her cultural inheritance.‘ The story unfolds entirely in a kitchen, the actress preparing an actual meal. The genius is each performance occurs in a private home kitchen donated by local citizens, and the actress doesn’t visit the ‘set’ until 30 minutes before she starts. She enters each performance as the character she portrays – displaced, forced to navigate unfamiliar surroundings. Food her anchor as she recounts refugee stories. Other’s stories. Some so unimaginable as reality I can’t even hold them.

The word Ally recently entered my consciousness. I’m co-creating a retreat with artist Kendall Sarah Scott for March 2018 called Madonna: Contemporary Ally. I put the words ‘I am a Writer’s Ally’ on my website. Yesterday a woman I like a lot mentioned looking for allies. I thought how the word like-minded became Tribe in our current lexicon. Tribe a word that goes beyond like-minded to associations on many levels. I looked up Ally online. The first definitions are about war, WWI & II to be specific. As if that was the first use of the word. I wondered if collaborators and supporters could become Allies in our minds. Ally implies a commitment, and perhaps a story behind the relationship, too.

The subtleties of language and story, so powerful.

Many years ago I heard a saying that said volumes to me – “If you want another perspective, stand on your head.”

We are made of stories. And we are all storytellers. Every minute of every day. In the tiny moments, and in the grand arenas. Textures and gorgeous color palettes of humanity & majestic nature wrapped up together. In my world, it’s time for different perspectives. For myself, and for that broad space beyond my dot on the planet. 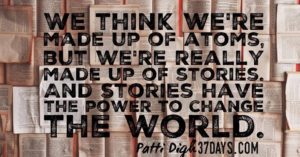 *
Looking for help with your writing or writing life? Click Here.
Like to Listen? Check out The Creative Life for People Living in the Real World.
Wanna know what’s up next? Events page has all the News.
Check out the #1 Bestseller
“The Writer’s Block Myth – A Guide to Get Past Stuck & Experience Lasting Creative Freedom” 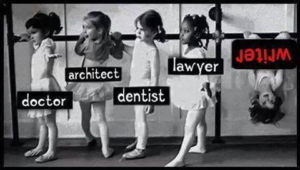 Flower in a Drop photo by Aaron Burden on Unsplash