“It’s the absence of all the bodies, she thinks, that allows us to forget.
It’s that the sod seals them over.”
~ Anthony Doerr (from All the Light We Cannot See)
* 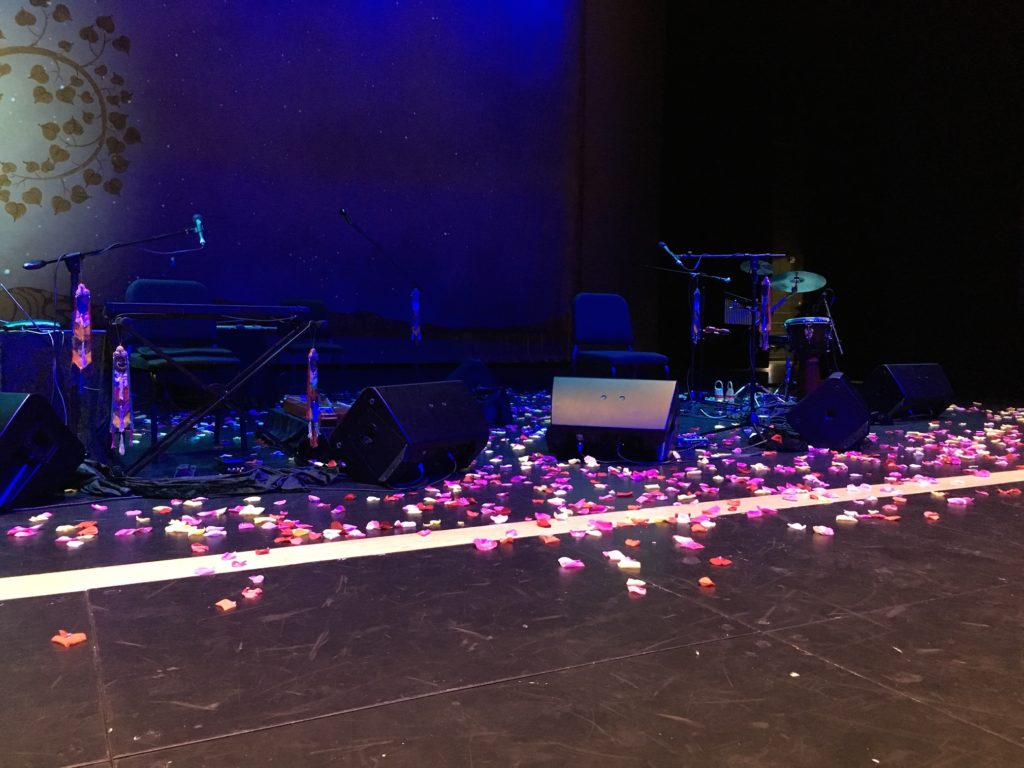 I don’t take pics during a performance. This is before Deva Premel & Miten came out.
What wonderful heart energy, I thought. Those rose petals beneath their feet.
*

I just read two novels back-to-back set in France during WWII German occupation. It wasn’t intentional to do that. Each showed up as the best option when I was looking for a story to settle into. One in a very small library at the beach, the other in an airport bookstore. I’d heard they were good reads. And how the author showed the characters beyond the dramatic backdrop interested me.

The first is about two French sisters with completely opposite personalities. Their motivations and actions defined and driven by their character. The book’s sympathies center strictly in the French experience of the war. The second is about two young people with very different backgrounds, from opposite sides of the conflict, coming of age in war. Both books were heavily researched. Both were page turners. But my experience as a reader with each was like night and day.

In the sisters’ story, I was pulled in close, viscerally thrust bone-to-bone into the deprivations and cruelty. Ground so hard I skimmed over concentration camp scenes. Something I rarely do. I finished still wondering, as I have for decades, at what appears to be blind inhumanity. A wondering that’s niggled me despite many essays read that explore and explain the psychology and sociological influences. A wondering that prompted me to answer ‘I don’t know’ when someone recently asked if I believed in Evil, because my head knows the reasons such disassociation happens inside people, and how fear & character allow willful blindness, but Evil seems beyond reason. What I read in the novel seemed in the realm of beyond.

The language in the second book was so beautifully poetic, and some of the scenes so full of perfectly constructed lists placing me there, that I felt distanced from the horror. Strung out in a beautiful dream that wasn’t right. As I read, I understood on a new level how the rise and fall of the German Reich happened. A sympathetic human level, if you can believe that. The author showed me incrementally, in small details, in very short chapters that switched effortlessly between the people on each side. Every awful thing, each decision made that we think we’d never make, digested as I was carried forward. Held in a tight line of cognitive dissonance the entire time, with me not fully realizing it.

Until a simple line about a boy stepping on a land mine and ‘disappearing in a fountain of earth.’ I paused after that line, reread it several times. I could see the dirt rise high, arch and fall. Hear the cascading sound of granules showering the ground. My mind knew it was awful, and yet, the way he said it held a terrible beauty. He didn’t have to describe a thing. Not even the soft pink mist of blood.

That line, the boy disappearing in a fountain of dirt, was where I’d stopped the day I drove an hour to Sarasota for an evening of sacred chant with Deva Premel and Miten. I felt lucky to get tickets. I heard they only booked a few US engagements this year. I sat on the 8th row in the Performing Arts Center that sat only a thousand. No one in front of me. Only 2 phones glared before being snuffed. I felt extra lucky.

Toward the end Deva & Miten invited us on stage with them. Perhaps 200 of us went up. Miten led the men in a two line song about being the ocean. The women sang one word over and over with Deva – Hallelujah. When Miten said, sing to yourselves, I put my hands over my heart and sang with abandon as I swayed side to side. I felt my blood rise, run fast and strong. Felt my heart beat under my palms. Heard it pound it in my ears. And then my head lifted right off my body. When we stopped singing, I had to leave the stage. Everyone else stayed put. Miten was speaking. I was in an altered state I didn’t want.

I’m not sure how to convey the spectrum of experience after I left the building that night. Driving home in a sort of no-worry hyper-presence. Completely ungrounded the next morning. Unable to focus with care on anything. But I didn’t want to give a day to coming back to earth. ‘I have work to do, the clock ticks’ bobbed inside my floaty brain, and I wanted to meet that commitment. At 2:30pm, knowing beef would bring me back down, I drove out for hamburger.

Something has changed inside me. As weird as it sounds, my molecules spread so far apart they rearranged themselves when they came back together. I know it. And not believing in coincidence, that night as I picked up my novel I thought for the twelfth time there must be a reason I’m reading these two particular books back-to-back.

The last chapters of the book are an extended epilogue. We get a final wrap of each character and the connections between them. As I read I felt those chapters unnecessary. A device. Thought his editor was too much in love with his writing because there was no other reason they weren’t edited out. They steal something from the reader, I thought. But then, tears started. I saw they were like the fabled diamond in the story holding water and fire, immortality and death both. Illuminating a truth.

We are all connected. The possibility of the best and worst of humanity inside most of us. The choice how that’s played out not necessarily easy. But it’s a choice, whatever the motivation. And whatever happens, life moves on. We move on. Everything that’s happened in our lives becomes part of who we are. The past can either seal us under sod, or we can soften to all that remembering in our hearts, stand helpless to empathy for others. That’s what I got.

I still have to coax myself to trust I’ll be okay, come out upright on the other side of big changes in my life. Fear still sits in the corner, waiting to win. But I don’t think about resigning or quitting, any more. Don’t doubt I’ll get where I intend to be, do what I committed to do. That’s what I carry.

Tell me. . .what do you carry from the remembering in your heart?
I’ll tell you a secret. . .I’ve only just begun to tell you all I’ve seen.

I’m writing a book – The Writer’s Block Myth.
About getting past stuck, living and loving your best creative life.

4 thoughts on “Rose Petals Under Our Feet”