I didn’t get as much snow as Weather.com forecast. But it’s the mountains, and 4 miles away can have 4 times what I have. In fact, my bet is the 3 vacant seats in front of me last night at the Japanese taiko drum performance were probably the result of weather.

I thought about the many flowering trees as I looked out the window. How the blossoms were at their peak, and are most likely done for. That happens in the mountains, too, even when it’s not 15* ‘unseasonably’ warm with trees blooming a month early. Like the year the apple trees were hit and my heirloom roses died in Western North Carolina. WNC is one of the largest apple producers in the country (did you know that?), so it was a big deal.

Here’s what I also thought this morning. . .how perfect the pollen is tamped down. So many of us suffering with allergies. That I don’t have to water trees, which costs me a lot of money. That we get a bit of spring as we used to know it in Santa Fe, and I can wear sweaters a bit longer, something I missed in Florida. That the roads are passable. And I can see the snow-sky lift off the horizon, know the white will soon disappear and the sky will be crystal blue. Perfection in the imperfect.

I’m booking author talks around Santa Fe and Albuquerque, getting the word out about The Writer’s Block Myth. This week I spoke at a Southwest Writers meeting. Someone asked why writers get critiqued & consider it form, while other artists don’t. But they do, I said. In college classes it’s part of the process. When you work with a mentor, you’re critiqued. I could’ve said more. Could’ve gotten to the heart of his question…was it perception, or something else he was really asking. Because getting to heart of what’s there is what I do. And I didn’t.

I’m still thinking about that missed moment for me, for him, for the group. l learned from that mistake. As writers and creatives, we dance with creativity. Our goal always to expand the dance floor. And mistakes can do that.

Because mistakes take us beyond the boundaries and limits of ourself and what we set for ourselves. Opens us to other perspectives. It happens every time we show up imperfect. I learned this at Stony Brook Southampton Writer’s Conference one summer.

NYTimes bestseller Meg Wolitzer was teaching the class. I submitted a first draft of a scene I really liked for critique. It was a pivotal scene. Revealed layers of the characters, their changed relationships, and emphasized how the setting affected them. I wanted to know something very specific – did I pull off the transitions between four characters’ POV in a single scene. But after reading the work my classmates turned in for critique, I was mortified. It was clear they’d submitted edited, finished work. I cried all night.

Something totally unexpected happened the day of my critique. Not only did I get my question answered, I learned about the strength and weaknesses in my writing from a wise teacher. And readers saw things in the work I did not, such as a device that placed them in the time period of the work: a choke on a truck. Something I did unconsciously that could be used consciously. My craft improved. There was a wealth of information in that submission I cried over all night.

I’m lucky. I had practice before I got to Stony Brook. I grew into my Writer-Self in a group where we wrote from prompts and read our raw work. But I can tell you every instance where I stretched my boundaries on this journey, and they all started with a decision to trust the process and test my imperfection. It’s still scary, and I’m still doing it.

Show up imperfectly with your work. Be open to hear what works, what doesn’t work, what readers see and hear, and learn how you engaged them. Go for the perfection in the imperfection. Like that world gently covered with snow out my window.

Tell me. . .when were you brave with your imperfect work?
I’ll tell you a secret. . .I’m already composing the second edition of The Writer’s Block Myth.

Here’s me at Santacafe, one of my fav restaurants, celebrating my first author talk. The entire interior is white, except for the floor & these iconic NM antlers. Just had to get a pic.
Celebrate the triumphs. Even the imperfect ones. 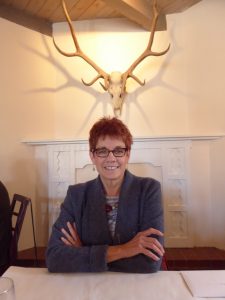