. . .letters that Benjamin Franklin wrote. . .how normal the letters were. Filled with greetings for the family & comments on mutual friends & now & then, a few random thoughts about politics & what are you going to do about it,
except maybe start a whole new country from scratch.

That’s when it struck me that’s how simple it is: each day living your life until the moment you have an idea like starting a whole new country & you stand up &
clap your hands together & say Well, then, I guess it’s time to get to work.
~ Brian Andreas
* 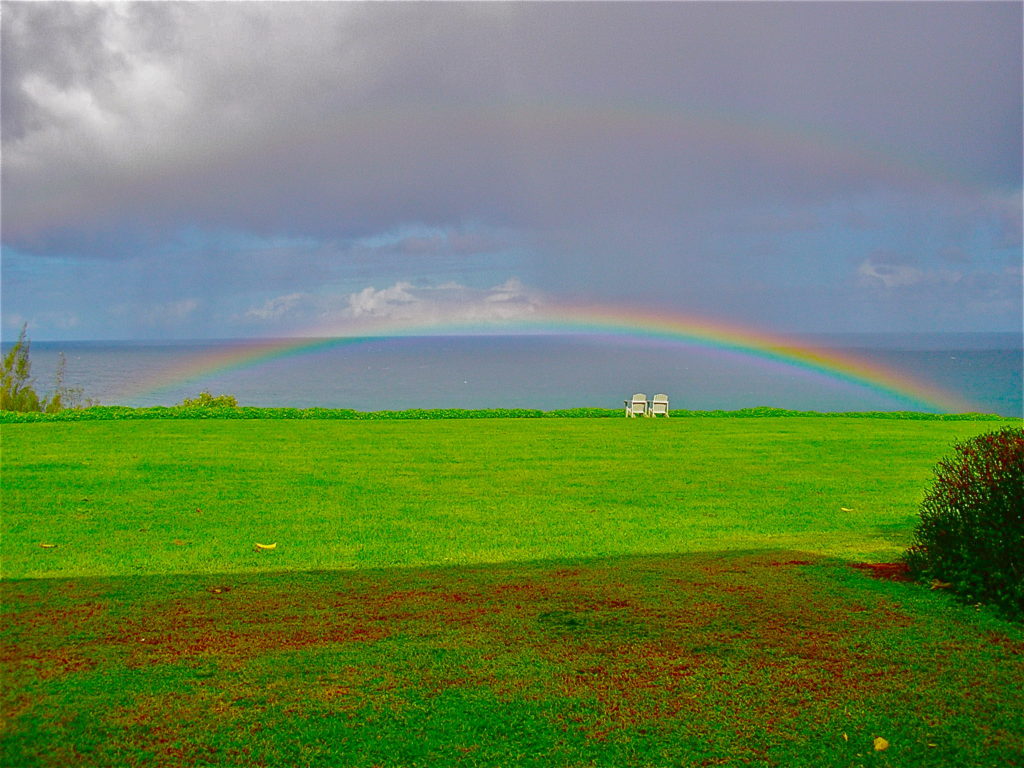 It seems I’ve traveled a million miles this past week, into new territory. Tuesday my business coach and I parted, leaving me feeling vulnerable, and at the same time sure I’m on the right track with renewed focus to my forthcoming book, The Writer’s Block Myth. That very night my husband returned from a trip north. Relationship building and contracts for possible work. Both our sights turned toward change. The next morning as we gazed at a big double rainbow in front of our building, I thought, a good omen. We’ll be okay.

I thought it even when I rose feeling fragile with only 3 hours sleep Thursday, coaching someone else. And read a wonderful poem entitled ‘What I’ll Miss’ which turned me tender as I considered my life. Even when hearing the manager at Trader Joe’s share he’s moving back where he feels more at home, too, which shifted me softer still. All okay ‘til I walked toward my car in the small, narrow lot where carts pock it like landmines, and I saw a woman at the car backed in next to mine leave a cart in the lane at her fender. Oh, don’t leave your cart there, I said. No admonishment. A plea. ‘You are so rude,’ she said. Stopped me mute in my tracks. Thrice more she said it. I looked to the many empty spaces in the lot, my mind wobbling, trying to make sense. She came close, spoke in a soft voice to my face. Said she moved the cart from behind her car so she could back in. That I was rude, and she wished I hadn’t said what I did.

She was in her car backing up before I thought to speak. Her window rolled up. Her face turned away, hand held up ‘no’ at my tap. 15 blocks toward home, I turned around. The note I left: I am sorry. I apologize. I did not mean to sound rude. I made an assumption, spoke without thinking. I was wrong. I wish you Peace. Heloise Jones. I purposely placed it with the words I am sorry up, so she might look before she flung it away. It was all I could do except chase her down in the store, which would be a total violation.

But the exchange sat with me. Something beyond the regret and remorse I felt. Beyond forgiving myself. I considered how I would respond in a similar situation. Know it’d be different. Probably thank the person for being conscious, saying I tried to be, too. While feeling all wiggly inside as I said it. But we don’t know another’s pain or experience, can’t know for them.

Friday, walking the 8 block loop in my townhome complex, the sky completely dwarfed my existence. One side clear, peaceful pale dawn, the few clouds in the field starting to take on sunrise yellow. And as I turned the loop, large billows I’m positive went to space, that looked like a hulking beast, like the scary dust storm racing to swallow Phoenix we all saw online once. Standing before me all gorgeous thousand shades of grays, whites, sweet washed blues, pink. I stopped, admired it. But as I turned the loop once more, I felt a chill like impending rain at my back, turned to see the cloud flattening, spreading overhead like a car’s sunroof closing. Noticed how the sky it overtook had darkened to the purest baby blue. And as the cloud spread, turned the colors of an old bruise, I saw a rainbow tucked in its layers. And that’s when I saw what I needed to understand about what happened in the parking lot.

I made a mistake. And what I didn’t see. . .she did, too. In the multiple times she repeated how bad I was. Not my action, me. Her assumption about me, labeling me. Then turning away to shut down all communication. Leaving no room for two stories, understanding, or reversal. I saw how both of us, the whole interaction – assumptions, speaking without thinking, labeling, shutting down communication – mirrored so much what’s happening in the world right now. What allows division to persist.

The rest of the morning rainbows popped to my mind unbidden. The rainbows shooting from clouds as I flew to the Big Island, Hawiaii. No one to see them but me and the flight crew on the last plane out, empty, because of impending hurricane. The darts and dashes on a clearest blue slate above me the summer the drought broke in NM. Short flying rainbow flags and banners mid-sky, no anchors to earth. So many so frequent my fellow humans seemed blind they didn’t look skyward with me.

Saturday I went for a late lunch. Dining alone, observing, sitting with my thoughts and the taste of the food something I enjoy. The gal who approached my table smiled brightly, openly, as if she beamed joy. And she made me feel seen, taken care of the entire meal. Like a gift. Like a reflection of the way I want to be.

I read articles about – ask questions of – have conversations with people who think very differently than I do often. Attempt to understand so I can hold compassion with my judgements. But this week something shifted bigtime. I believe I just committed to creating a new country from scratch.

Tell me. . .what new territory have you stepped into?

A secret:  I paused before signing my name on that note. Even believing if we mean what we say, we put our name on it.
A favorite:  I’m forgiving myself faster.

3 thoughts on “Answers in Storm Clouds”