I want to tell you about a cloud and the day the sky became the inside of an oyster shell. How the sun rose all the way to that high place it’s officially day, not as a firey ball, but as a shimmering while pearl. The whole time the air soft, the entire dome of the sky subtle washes of color and pristine mother-of-pearl. The awe in this everyday eye-view of an oyster’s, how beautiful it is. 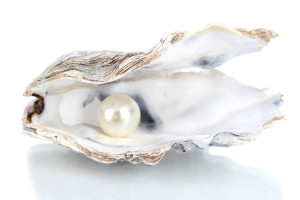 I’d spent a week focused on clouds. My head rocked back as I circled in place whenever outdoors. Billowy clouds. Clouds changing color thru pinks, orange-golds, brilliant whites. Clouds that flickered with lightning. Clouds layered like torn gauzes and silks. Small dark ships of clouds, flotillas sailing swiftly over the bay.  On an everyday sort of morning, I looked up to pink tubular trails traced toward the water. Fat trails, uniform, round. As I approached the bayshore park lawn, color blazed through the trees. I didn’t see it was no ordinary dawn until I stood at water’s edge, saw the side-to-side wavy form of a funnel rise from a singular point on the far flat horizon. Spread into a broad orange and gold fan of swirls, folds, and lights filling half the sky. At the top long fingers stretched as feathers that wisped and dissolved to gather again as the trails I followed down. The cloud shifted and changed, darkened and lightened, fascinated for nearly an hour. The point of it’s origin and the stem it grew from intact. Once evenly spaced parallel lines like shark’s gills grew across one side. Another time it turned into an invisible dancer’s skirt. And as daylight approached, it melted, puddled, stretched into a plane of peachy pinks and pearlescence. Like a conch shell, we said. And as the shimmering white pearl of the sun crested and rose, the colors and sky softened, lightened, changed to the inside of an oyster shell. We were inside the shell of the sky’s dome, like oysters, seeing what oysters see every day. It was so beautiful we were speechless. None of us had cameras. Words are so inadequate.

Since then I’ve had two dreams where I sit at a table with fresh, perfect, white vegetables. Last night white Japanese eggplant. Days ago bowls and piles of different varieties. All white. For years I’ve said I don’t want a milktoast life. But this is about so much more.

Transcendence comes through Connection. Can be hard and beautiful, both. Another’s story, another’s view, you sometimes don’t know ’til you’re in it. How many times have you been there?

Little girl, be careful what you say
when you make talk with words, words—
for words are made of syllables
and syllables, child, are made of air—
and air is so thin—air is the breath of God—
air is finer than fire or mist,
finer than water or moonlight,
finer than spider-webs in the moon,
finer than water-flowers in the morning:
and words are strong, too,
stronger than rocks or steel
stronger than potatoes, corn, fish, cattle,
and soft, too, soft as little pigeon eggs,
soft as the music of hummingbird wings.
So, little girl, when you speak greetings,
when you tell jokes, make wishes or prayers,
be careful, be careless, be careful,
be what you wish to be.
~ Carl Sandburg, Wind Song

*
Another small journey. Getting to Wise.
A writer’s life.
*